Daughter of Inspector Rajesh Kumar Singh becomes senior officer for one day as reward for securing fourth rank in ISC nationally. Richa Singh, art’s student of GD Birla Centre for Education in Kolkata was appointed as the Honorary Deputy Commissioner of Police for one day as a reward for securing the fourth rank in ISC nationally by scoring 99.25%. She reported to the station at 6 am in her school uniform. She was able to give orders and note down reports from all the officers present.

She carried out her duties adeptly and checked how the CCTV cameras function.

“Since I was allowed to give an order to any of them, I preferred to order my father to return home early. It was really special, he went back early after taking due permission from his seniors”, said Richa regarding this special experience.

88,000 tons of radioactive waste – and nowhere to put it | Verge Science 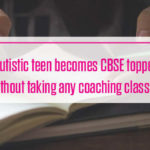 Kaafila was a great experience for us, the team of students”—Brainfeed in Conversation with Shiv Nadar School