Noticing the unequal distribution, he stated, “Eight medals have been given to meritorious students at this function. Among the recipients, there is only one girl. Besides, out of 733 students who are being awarded their degrees, only 96 that is a mere 13 percent comprise girls.”

Commending the academic performance of the girl students, he insisted on the need to fill this gender gap. Narrating the success of “Missile Woman” Tessy Thomas, who was the Project Director for “Agni IV” missile, the President remarked, “we need many more such women leaders in the field of technology.”

In the eighth convocation ceremony of NIT Patna, eight medals have been given to meritorious students at this function. Among the recipients, there was only one girl. 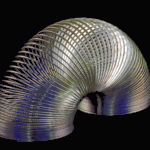 The Accidental Origin of Slinky, the immortal Coil

Byju’s One of the World’s Top Ten Downloaded Apps