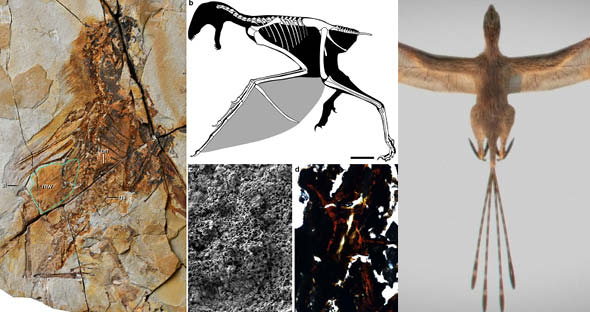 Recent fossil of a feathered dinosaur with bat-like wings unearthed in north-eastern China shows a detour in the evolution of birds. Being termed as Ambopteryx longibrachium, the dinosaur lived 163 million years ago during the Jurassic Period. It flew with membranous wings made of skin supported by a long, pointed wrist bone, dramatically different from the distinctive feathered wings of birds.

“The discoveries of Ambopteryx & Yi completely change our view about the origin of avian flight,” said palaeontologist Min Wang of the Institute of Vertebrate Palaeontology & Paleoanthropology, Chinese Academy of Sciences.

“For a long time, we thought feathered wings were the only flight apparatus” in the evolution of birds, added Wang.

“However, these new discoveries clearly exhibit that membranous wings also evolved in some dinosaurs closely related to birds. Put together, the breadth & richness of the experimentation pertaining to flight is greater than was previously thought during the dinosaur-bird transition. And we may be seeing just the tip of the iceberg,” he mentioned.