Large, open playgrounds accommodate sports such as cricket, football, and hockey. and other games and forms of exercise. The cricket team trains at the Centenary Ground located on Mahatma Gandhi Road near the Mayo Hall. The school pays great attention to physical training and sports and has long conducted the Annual Hockey Tournament for ICSE schools in Bangalore. Sports rivalries have been strong since the mid-19th century. The school hosts a Cadet Platoon, a Boy Scout Troop, and Debating and Literary Societies for the higher classes 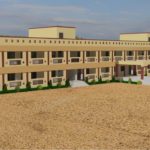